Monday, April 30, 2012 marked the twelfth anniversary of the creation of the No Parole Peltier Association and the NPPA website.

In the past year the NPPA has continued to update the Peltier matter with monthly Blogs. The last and crucial Editorial Essay “Critical Witnesses Against Peltier (#55 in the Debate Continues section) provides an in-depth analysis of the four witnesses who the jury had to rely on to come to their conclusion that placed Peltier, Butler and Robideau at the agent’s vehicles when the initial shooting ended—and the agents lay critically wounded—when the final killing shots were administered to their faces: Jack Coler, perhaps, and hopefully unaware of what was about to happen and Ron Williams, hand raised in defense, as Peltier shot him, and as later testimony quoted, “the …-… begged for his life but I shot him anyway.” So much for Peltier’s feigned bravery as an alleged “warrior.”

 Destroying (compliments of “Feather”) the LPDOC’s “Analysis of Constitutional Violations.” (Alleged violations, that is.)

 The young would-be filmmaker, Preston Randolph, who’s film, “Wind Chases the Sun,” (if it ever is produced) will hardly be fair-and-balanced but more in the genre of Nazi filmmaker Leni Riefenstahl (Preston could only pray to be that talented) and merely more Peltier propaganda for uninformed supporters. It will be only a minor challenge to factually destroy it.

 Pointing out the conspicuous contradiction of Peltier folklore where in the film “Incident at Oglala” Robideau claims that their first intent was to “…capture these two agents” and then segues into one of the biggest Peltier lies, the fable of Mr. X.

 “They attacked the village” blog goes into great detail and specifics of how Peltier, at this late stage is trying to reinvent the facts. It’s as if he has finally, as the expression goes, gone stir crazy. But some of the statements he makes go far beyond that. Now he’s just story telling. Please see the 12/27/11 Blog for some very real revelations about Peltier the fable-maker.

 Thanksgiving: Some comments on what Peltier called genocide and a list of actual facts from the record of his case and conviction that cannot be disputed.

 Peltier whines because he got the top bunk: The LPDOC uses a very dangerous word, “Lobbying,” in furtherance of the Leonard Peltier Political Action Committee (satirically, LEO-PAC), which is unlawful, along with their constant pleas for cash and refusal to document where any of those funds have gone. And comments on a couple of Appalachian State University students who haven’t used their research skills to discover the truth about Peltier’s guilt. One said he was “…prepared to sit out here as long as it takes to give him freedom.” That was November, and it would be logical to predict that he’s not still sitting there.

 A review of Peltier’s clemency efforts and correcting the LPDOC’s continuous out-of-context quotes: They find the complete quotes to be pesky impediments to their ultimate purpose to obfuscate Peltier’s actual guilt. This was where Peltier made the statement that any parole board would love to hear to make their decision that much easier: “And really, if necessary, I’d do it all over again, because it was the right thing to do.” Yes, Leonard Peltier actually said that. Peltier’s petition for clemency, blindly signed by the unknowing, was a disgraceful fabrication of the actual events and facts. (Blog 10/22/11)

 The NPPA offered Peltier a $1,000 donation in support of their constant plea for any money from anyone or anywhere. Peltier and his network essentially admitted they were broke. All he had to do was put his tax returns on his website and a check would have been willingly sent. Of course neither happened.

 Peltier gets shot. Well, as the prison slang goes he got punished (a shot) and wound up in the hole (solitary) for six months. Around the same time he was transferred from FCI Lewisburg, PA to FCI Coleman, FL.

 In a video, former Leavenworth Bureau of Prison’s guard Bruce Smith proves that his love affair with Peltier has nothing to do with the facts.

 Imagine the horror, “Yesterday another prisoner was moved into Leonard’s cell.” So said the LPDOC. Peltier’s self-imposed privilege as allegedly America’s political prisoner carries little weight outside a small circle of fringe supporters. Of Peltier’s greatest sins, first and foremost is the remorseless murder of two wounded agents, second is adulterating the legacy of brave Indian warriors. He has hijacked and cheapened a proud and storied past. But Peltier knows that mainstream Native America doesn’t support him and does understand that neither he nor the American Indian Movement contributed nothing but turmoil and anguish to their culture. 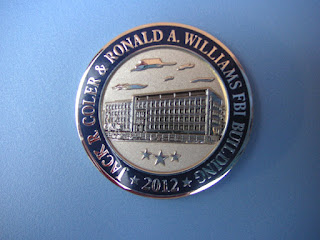 Tuesday, May 1, 2012 marked the dedication of the FBI’s newly constructed Minneapolis headquarters building named in memory of Special Agents Jack R. Coler and Ronald A. Williams.

The Minneapolis Division covers Minnesota, North and South Dakota, which, of course, includes the Pine Ridge Indian Reservation, the Jumping Bull property and the site where Agents Coler and Williams were murdered in the line of duty.

The morning ceremony, attended by many including those responsible for completing the massive two-year project, elected officials, local law enforcement, representatives of the Department of Justice, current and retired FBI agents, and family members and relatives of the slain agents.

Later there was a formal dedication of the office recognizing five Minneapolis agents who had died during the course of their official duties; two in a plane crash and one by a drunk driver. The office’s executive conference room was named in memory of Special Agents Trentwith S. Basford, Mark A. Kirkland and Lee E. Morrow.

The new building was dedicated and named in honor of Jack and Ron. Their memory and sacrifice will be forever immortalized in the Minneapolis Division and the Federal Bureau of Investigation.

“In the Spirit of Coler and Williams”
Ed Woods
Posted by Justice at 10:57 AM