After all the years of lies, fabrications, misinformation, myths and folklore, Leonard Peltier has decided to come clean and finally tell the truth about what happened at Jumping Bull on June 26, 1975, and beyond.


Please visit the newest Peltier websites for a revelation of the facts surrounding his admissions.*


Within the above Internet links, Leonard Peltier provides the facts surrounding what he has worked so doggedly to protect since his conviction in 1977.


See here as he tells us:


--His only real alibi, that someone they knew killed the agents and drove off in the red pickup, was all a lie, a contrived story that Mr. X was the murderer.[i]


--That Peter Matthiessen was right when he reported that one of the agents, Agent Williams, when taking off his shirt to aid Agent Coler, waved it as a white flag of surrender. And that it was ignored by Peltier and the others.[ii]


--That all the fundraising has been just one long scam to fleece the gullible into believing that all that money was going somewhere, and certainly not to his defense.[iii]


--That he joined with other like-minded killers; Wesley Cook, aka Mumia Abu Jamal, and Timothy McVeigh.[iv]


--That the testimony of the four critical witnesses against him, were right, and the jury, as they should have, believed them.[v]


--That he really does believe all politicians are sleazebags.[vi]


--That he did mean it when he said “And really, if necessary, I’d do it all over again, because it was the right thing to do.”[vii]


--That even though the NPPA has been sending him copies of everything that’s put on the website, he does read it all, but never writes back.[viii]


“In the Spirit of Coler and Williams”
Ed Woods

*Satire is a way of making a point by exposing Peltier’s criminality and hypocrisy for all to see. The irony here will be lost only on Peltier himself and those who are too blinded by misplaced passion and often have either a mistaken or deliberate ignorance of the facts. Another satirical example is a 2009 letter to President Obama in which Peltier makes his case for consideration for clemency while accurately describing the truth and facts with relevant references to case history http://noparolepeltier.com/plea.pdf.


(Of course, since 2009, there have been many instances, all documented, where Peltier has completely reinforced his own guilt and contradicted the cesspool of fabrications he and his supporters still offer to the unsuspecting and uninformed. More to follow: Peltier’s second biggest lie…) 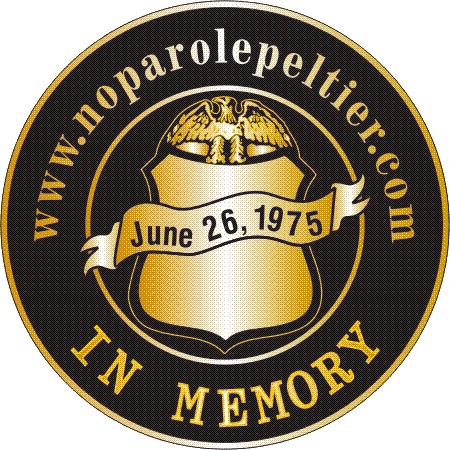