It appears to be frozen in time with the latest posts as meaningless as Peltier’s claims of innocence, not to mention the perversity of his view that his conviction represented his people.

--On the home page there’s a link to 8th Circuit Court, Judge Gerald Heaney’s letter.
A letter long debated but clearly not an endorsement of Peltier’s innocence, actually quite the contrary. [i]

--Statement by former FBI Agent and Congressman Don Edwards:  This clearly demonstrates the desperation of the Peltier network. Edwards’ letter is dated December 21, 2000 and was the subject of a critical NPPA rebuttal. [ii]

--Letter by former U.S. Attorney James Reynolds: Reynolds called for clemency and erroneously claimed he had management and supervision over the Peltier conviction. (Mr. Reynolds should be publicly challenged about his assertions, but at this point, it doesn’t matter.) [iii]

--Letter by former FBI agent John Ryan. Disgraced and dismissed, Ryan’s opinion on Peltier is of no consequence.

Further on in the Peltier website there are links to:

--Russ Redner, Thanks for nothing, Obama: Which is rich because Redner, at times, was more of a hindrance than a help to Peltier and was responsible for one of the most ignorant and reprehensible public statements regarding the deaths of Special Agents Jack Coler and Ron Williams.  Peltier publically also brought to light Redner’s “severe emotional and mental problems.” [iv]

--Celebs react to Obama denying clemency to Leonard Peltier: Really? Who cares or gives a rats-whatever what the Hollyweird crowd thinks. Overpaid egotists should stick to what they do best (sometimes anyway), pretending to be someone else.

This is followed by a longer list of the same old plaintive cries of a wrongful conviction completely unmoored from the facts of June 26, 1975 and Peltier’s conviction and many subsequent appeals. Appeals that only reinforced the validity of his rightful conviction and unquestioned guilt. Guilt only toughened by Peltier’s many public admissions. [v]

But not a word from Peltier.

The last time Peltier believed commutation was imminent, but wasn’t, he fired off his famous “politicians are such sleazebags” comment during a public interview about President Clinton.[vi]  We’re likewise patiently waiting for a similar attack on former President Obama. [vii]

But now inmate #89637-132 must be in a state of bewildered disbelief, sucking his thumb and curled up in a fetal position in the corner of his USP Coleman cell, knowing full well that he’s not going anywhere during this law and order administration.

Peltier does still have the statutory opportunity for parole review hearings, this year and in 2019. Years’ past he has waived the hearings but the sense now is that he’ll at least take a crack at this one. What else does he have? These hearings are administrative in nature to address any mitigating circumstances concerning his sentence and incarceration. Since Peltier remains totally unrepentant, that part is a nonstarter. He does, however, try to make as much noise as possible about his health. Too bad for that, since he robbed Jack Coler and Ron Williams of their opportunity to have a full life and face the predicable aging process.

But we will be watching whether or not Peltier does have a review hearing, now or at any time in the future. [viii]

Nevertheless, there is one bright spot for Peltier. The U.S. Bureau of prisons has hospital facilities.

*The NPPA never hesitated to publicize Peltier’s website. It has been on the NPPA homepage since April 2000.

Postscript:
Now that the Peltier saga has all but come to an end it was time to consolidate the many documents and reference materials and reorganize my study for a long-planned project. In the basement are several storage boxes of Peltier material and four file cabinet drawers in my study that accumulated over the past few years. These were reviewed, duplicates or unnecessary material was discarded, and what remained was placed in another plastic storage bin to join the rest—never to be destroyed, but available, if needed, for historical reference, along with the NPPA website. The next personal project will not be about Leonard Peltier, but another equally important FBI case. Nearly seventeen years of Peltier is about enough. Yet some things will remain. Found among the many documents, blogs, Editorial essay research material, etc., was a simple black and white flyer that brought back an incredibly strong and fond memory—a handout that was given to all who attended the dignified procession to the White House on December 15, 2000 as a show of solidarity against any consideration by then President Clinton not to grant Peltier commutation. Also, not in storage, but on the top shelf of my study in front of the folded flag for the past sixteen years, is a photo in front of the White House of four very proud FBI agents on that cool, crisp winter day. One, who came up with the idea and led the organizing effort; her future husband assisting her; an agent who was very close to Ron Williams and worked the RESMURS case to the end; and a pushy New Yorker who recognized that a torch needed to be lit to honor the sacrifice of two young agents killed in the line of duty and to counter the lies and fabrications from their murderer. It was an incredibly meaningful experience for all who attended and we still owe a debt of gratitude to all those who made that day so significant. 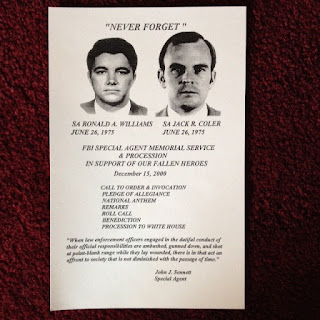 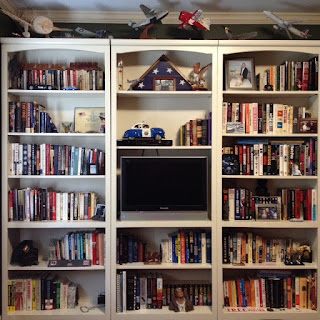 PELTIER: NO PAROLE EITHER 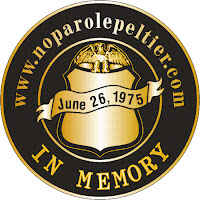 We respectfully submit the following, particularly Peltier’s public admissions as late as 2016, as justification for denying parole consideration.

Briefly, Peltier was convicted for the brutal murder and aiding and abetting in the murder of FBI Agents Jack Coler and Ronald Williams on the Pine Ridge Indian Reservation on June 26, 1975. He received consecutive life sentences plus an additional seven consecutive years for an armed escape from USP Lompoc in 1979.  Also, due to a number of prison infractions Peltier has served a total of over five years in solitary confinement.

Peltier has maintained his innocence, claiming to be a political prisoner, and has been supported by a number of celebrities. However, his version of the killing of the agents has changed numerous times over the years and his public statements (set forth below) belie his innocence.

On July 28, 2009 Peltier was afforded a full parole hearing, at which I was one of the witnesses.

Peltier’s parole was denied and extended for fifteen years to 2024. However, under the sentencing guidelines he is afforded biennial interim parole review hearings that may occur this year and in 2019.

Of critical importance is for the Commission to be fully aware of Peltier’s public admissions since his last parole hearing:

In 2010 Peltier stated, “And really, if necessary. I’d do it all over again because it was the right thing to do.”

On February 17, 2016, Peltier submitted a petition for executive clemency. His attorneys, Martin Garbus, Cynthia Dunne and Carl Nadler made this document public on the Internet. President Obama denied the petition on January 18th.

The petition is replete with factual errors and relies heavily on long disproven claims by Peltier as he has proffered a never-ending stream of myth and folklore surrounding the events of June 26, 1975 and beyond.

Of critical note for parole consideration is on page three of this document under the heading of “Remorse” where Peltier makes yet another admission of guilt:

“I did not wake up on June 26 planning to injure or shoot federal agents, and did not gain anything from participating in the incident.”

Prior to, and since the 2009 parole hearing, Leonard Peltier remains the unrepentant and remorseless cold-blooded executioner of two federal agents he and others had already attacked and severely wounded. Agent Coler, nearly fatally wounded, was believed to be unconscious from a devastating wound before he was shot twice in the face. Agent Williams, however, was alive and had a defensive wound to his hand before he too was shot in the face, killing him instantly.

Peltier will undoubtedly claim he should be paroled because of health issues. The Bureau of Prisons has medical facilities to address inmate aging and health concerns. However, Jack and Ron, because of Peltier’s criminal actions, never had the opportunity to live a full life and face the inevitable aging process. Peltier robbed them of that possibility.

Leonard Peltier should be shown as much consideration and compassion as he gave Agents’ Coler and Williams, which would be none.

We respectfully request that in view of Peltier’s public admissions and lack of remorse he should not be considered for parole at any time.