Ron was robbed of his opportunity to reach his 65th birthday and live a long, happy, productive and successful life. His chance meeting on a sultry morning at Jumping Bull and his bravery and heroic efforts to aid his critically wounded partner are a matter of record and FBI legend. Ron’s memorable sense of humor, charm, warm and outgoing personality, intelligence and dedication are acknowledged among those who had the privilege to personally have known and worked with him.

Our thoughts and prayers are with the entire Williams’ family. May he continue to rest-in-peace and be assured that his sacrifice in the line-of-duty will never be forgotten.

Postscript: At times like this we have never mentioned Peltier, this being the only exception when just days ago Peltier suffered yet another blow to his enduring frivolous lawsuits. A federal judge rejected the argument by Buffalo, New York attorney and Peltier apologist Michael Kuzma regarding Frank DeLuca (a.k.a Frank Black Horse) who was arrested with Peltier in Canada in 1976. Kuzma (albeit with Peltier and the LPDOC) in some perversely distorted way believe that FBI documents regarding this  “shadowy figure,” “may help vindicate Peltier.” As if all the evidence, all the many statements from Peltier himself will remove Peltier and his murderous actions at Jumping bull in 1975. Let’s remind Kuzma of Peltier’s only real alibi; that someone else killed the agents, someone they all knew, the fabricated Mr. X Peltier offered for many years and that his own cohort, Dino Butler publically said was a lie, and while his own biographer, Peter Matthiessen (In the Sprit of Crazy Horse, p.547) didn’t believe either. Or, Peltier’s own statement that “the person who was responsible for our arrest was the old man Yellow Bird who we learned later was paid for his work by he RCMP…” (ITSOCH p. 403). Perhaps, during those dark nights in Kuzma’s delusional paranoia DeLuca is on the grassy knoll in Dallas as well.  In a very parochial sense Kuzma is clogging the court system with fabrications that DeLuca, or anyone else for that matter, would minimize, or least of all, vindicate Peltier.
Posted by Justice at 9:00 PM 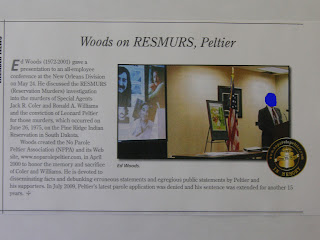 On those rare occasions when Peltier says something constructive and positive it has been acknowledged.

Here, in his “Leonard Peltier 2012 Statement” he encourages people, especially the young and disenfranchised, to set personal goals to improve their condition and focus on both their heritage and future. To educate themselves and search for the knowledge that will bring them to understanding and living a better life. He properly warns of the dangers of yielding to boredom and a lack of direction with the debilitation of alcohol and drugs. His message is clear, concise and meaningful for all youths, especially Native Americans whose heritage was systematically robbed from them.

Peltier ends with this lesson; “…remember the sacrifices of those who lived and died for you. Remember Joe Stuntz…”

Yes, this is vintage Peltier. Really? Remember Joe Stuntz for helping Native American youth to connect with their heritage? Not quite.

Yes, Joe Stuntz (who Peltier speciously renamed “Killsright”), who stood over the mutilated bodies of two murdered human beings after he was one of the ones who shot at them to begin with, and then stealing a dead agent’s FBI raid jacket from the trunk of a bullet ridden vehicle. Stuntz, who wore that stolen jacket as he later fired on law enforcement responding to the aid of Jack Coler and Ron Williams (they had no way of knowing that it was already too late). And the same Joe Stuntz who was drilled in the forehead by a BIA officer, and thanks to Peltier, never left the Reservation alive that day. This is not made up; we know all this from Peltier himself “I seen Joe when he pulled it out of the trunk and I looked at him when he put it on, and he gave me a smile.”

Stuntz gives a “smile” yet. What a wonderful role model for Peltier to pick for Native American youth. Thankfully the vast majority of Native Americans, young and old, recognize how destructive Peltier and AIM was to any legitimate cause for equal rights and justice. But in his “prison setting” where the “…days go by oh so slowly,” and his nightmares are in his “waking moments,” it’s certain that any lucid moments, (like an otherwise good message to his dwindling followers), evaporates quickly into the remorseless personality Peltier has always had.

He did though, seemingly for the first time, introduce yet another fabrication into the lexicon of Peltier folklore, “Oglala Confrontation.”

“Confrontation?” Is that now what he wants to call it? Shooting and severely wounding two human beings and then destroying their faces at contact range: A confrontation? No, Leonard, and anyone who would listen to him, that wasn’t an argument, disagreement, quarrel, altercation or conflict, that’s what society calls, murder.

It would be compelling to suggest Peltier confront his own conscience, but that died a long time ago…if it ever existed at all. It will be better for him to try that line with The Creator when the time comes. The Creator won’t buy that sorry excuse either.

Peltier also said to the young who may listen “I hope and pray that none of the young people will ever end up in any prison situation.” Good advice.

Better advice: Don’t for a second believe that Peltier is a role model for anyone.

“In the Spirit of Coler and Williams”
Ed Woods
Posted by Justice at 11:25 AM