No clemency: President Obama made it very clear (again) (USA Today May 1, 2015) of his intentions and cautious approach to allow those who are "deserving and qualified" for consideration for Executive Clemency. In his guidance to the Pardon Attorney, the President specifically eliminated crimes of violence and gun crimes, both of which exclude Peltier. Peltier's case has been under the proverbial microscope for decades and his conviction(s) and sentencing(s) have never been altered. Peltier's long incarceration for his heinous crimes is deserved and not a consideration under the President's guidance. Rehabilitation could be a factor, but Peltier has removed that as well, demonstrating not one shred of remorse for his crimes with even a fairly recent public statement in 2014 when he said "I don't regret any of this for a minute."

On June 26, 1975, in the span of a few brief moments, Leonard Peltier's life was inexorably and forever changed. However, he was still the same person the day before and has remained so ever since.

Peltier, an unrepentant cold-blooded murderer, is neither deserving nor qualified for clemency consideration; a fact he needs to finally comprehend.

More Pathetic Begging: In public messages on May 1st and 8th Peltier and his network make pitiful pleas for cash:


"Please donate $5 or $10. No amount is too small...to defray the cost of air and ground transportation, lodgings, meals and other incidental expenses for legal visits and to help Mr. Peltier's family members, most of whom have been unable to visit him at all in recent years, to travel to Florida."

"Legal visits?" That ship sailed a long time ago, so anyone who buys into the notion that Peltier has legal expenses is a victim of the continuing con job. Peltier can submit his clemency application with a piece of paper and a crayon. No attorneys need to visit him or Washington, D.C. Besides, a number of well-intentioned and dedicated attorneys have devoted thousands of dollars and their time and efforts, pro bono, (without charge, gratis, free) to help Peltier over the years. All to no avail because his factual guilt stands on its own merits and his moral guilt, by his own admissions, is without question.

"Incidental expenses?" Peltier has been challenged many times to come clean with the finances, but never has and never will.* For those who are blinded to the "Peltier the poor Indian victim" rhetoric, his guilt notwithstanding, there remains an enduring dirty little secret: How much money (and where has it all gone) has Peltier fleeced from those bemused disciples? Peltier and a select few know, however, they'll keep that misinformation to themselves.

If there's any doubt as to the continuing scam Peltier has perpetrated, unabashedly in the name of his "cause," spend a few minutes seeing how all that stacks up to the realities: http://noparolepeltier.com/debate.html#fraud

As for family members visiting Peltier at USP Coleman in Florida, that's too bad, but there's a more realistic view: Jack Coler and Ron Williams' families have never been able to visit thier loved ones.

Whois?  To clarify the message in the "Peltier comes Clean" April 30th NPPA blog, it was, of course, satire, making the point of exposing Peltier's criminality and hypocrisy. He has become delusional and actually believes the myth and folklore that has grown like mold around him. Peltier's claim that what happened at Jumping Bull had anything to do with the history of a proud and storied native heritage borders on sacrilege. He wants to believe that by diverting attention away from his own criminal acts to the real brave warriors and leaders of Native American history that he can somehow walk in their honorable moccasins.  Any but the foolhardy know that is impossible.

Set aside for the moment Peltier's disrespect for women and shoving a gun in Anna Mae's mouth to make her confess to something she was not (an informant) and AIM attorney Bruce Ellison's "taking the fifth" for his involvement in her eventual kidnap, rape and brutal murder, and notice Peltier's downward slide of fortunes; most recently in a rag-tag, rent-by-the-week office in Florida, under the auspices of David Hill, (who has more AIM baggage than even Ellison), to a P.O. Box in Hillsboro, Oregon.

And yet, still prominent on the whoisleonardpeltier.info website (note that it's not .org, .net, or .com; see below), is the most blatant and provable lie in the Peltier lexicon of four decades old fabrications (lies). Redford's film "Incident at Oglala" features the admission of guilt, the airing of Peltier's only alibi that has been proven by his own people (the former LPDC and Dino Butler), and of late, one of his own lead attorneys, that the whole Mr. X fabrication was a lie. A lie certainly now known to Redford who is too blinded or naive to admit he was duped by the wannabe leader Peltier.

It borders on incredulous that the ILPDC still believes that this film does anything but reinforce Peltier's obvious guilt and propensity to lie about the facts. Watch and listen as Robideau describes Mr. X killing the agents and escaping in the infamous red pickup (at 1:20:50 to 1:23:40hrs in the film) and then as Peltier confirms the canard with "This story is true." It wasn't true in June, 1975, during the making of this flawed film, nor is it today.

To real Native Americans Peltier is a pariah, a humiliation to their otherwise storied history, and a festering sore created by Petlier and the American Indian Movement that they would just as soon relegate to the garbage heap and forget ever happened. Peltier and AIM contributed nothing to the betterment of Native America and the vast majority understand that.

"In the Spirit of Coler and Williams"
Ed Woods
*See NPPA Blog "A dog-dare for Leonard Peltier," October 3, 2010 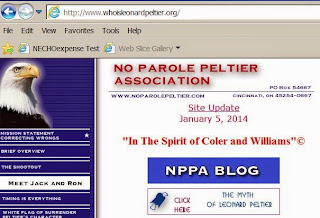