On that day there was a chance meeting with FBI Agent Coler’s son. Paul was but one and a half when his father, Special Agent Jack R. Coler was brutally murdered along with his partner, Ronald A. Williams, in a desolate corner of the Pine Ridge Indian Reservation, South Dakota on June 26, 1975.

The brief encounter led to a greater interest in Leonard Peltier and that evening an Internet search revealed a host of websites and references demanding the parole, pardon or clemency of political prisoner Leonard Peltier.

Every page of Peltier’s website was downloaded and reviewed. Peltier’s “defense committee” directed its supporters to read In the Spirit of Crazy Horse (ITSOCH) by Peter Matthiessen and watch the “documentary,” Incident at Oglala by Robert Redford.

At that time Peltier had the Internet to himself except for a section of the FBI Minneapolis website entitled RESMURS (Reservation Murders). That detailed and factual account was also thoroughly reviewed.

However, the problem was that the FBI was not in a position to challenge Peltier in the public domain.

Watching “Incident” nine times (a screenplay of Matthiessen’s book; certainly not a documentary), and focusing on every word in the 634 pages of ITSOCH along with the unbelievable and outrageous claims made in Peltier’s own book, Prison Writings, left no doubt that the myth and folklore surrounding Peltier was unmistakable. These resources provided the public with a skewed and inaccurate scenario, faux facts as it were. There were numerous contradictions, fabrications and some transparent lies of what actually happened that sultry June day on the Jumping Bull property.

The next step was to secure all the appellate filings and decisions, nearly two dozen in all, to factually refute Peltier’s feigned claims of innocence and an alleged wrongful conviction.

What followed was a decision to go public and just twenty-seven days later, on April 30th the No Parole Peltier Association and its companion website were launched.

It was evident that Peltier was incapable of accurately reciting details of his own conviction and appellate history while he changed his account of what happened and fabricated a nearly two-decades-long lie (his alibi) that the phantom “Mr. X” was the one who killed the Agents, driving off in the infamous red pickup. This fiction was publically refuted by another protagonist, Dino Butler, who participated in the carnage that fateful day. Nevertheless, in one of several filmed media interviews Peltier said, “This story is true.” Well, it wasn’t. It remains a lie. A lie Peltier and his supporters try desperately to ignore.

The goal of the NPPA was apparent; to never forget, and to honor the sacrifice in the line-of-duty murders of FBI Agents’ Jack Coler and Ron Williams and to confront—head on—Peltier’s alleged innocence and offensive claims. Claims that Peltier supporters accept without a second thought.

Early on, a logo for the NPPA was created: 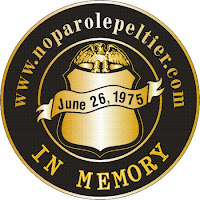 Heraldry of the NPPA logo: The colors, deep black contrasted with bright and shining gold represent the divergence of opinions of those on each side of the Peltier issue. Within the logo are two circles representing the narrow and continuous path followed by those in the law enforcement profession as they set aside personal interests in favor of the common good and protecting the life and liberty of the citizenry. A simple, “In Memory” to honor all those who have given their lives in the line-of-duty. The badge, worn proudly by those who raised their right hand and took a solemn oath. A banner, reaching out to touch both sides of the inner circle representing the camaraderie of those who have chosen to be part of a special calling. And, the date, June 26, 1975, of the End-of-Watch of two brave young men carrying out their sworn and lawful duties who were wounded, murdered, and left in an isolated corner of South Dakota.

The first public challenge to Peltier was met with their filing of a federal civil suit naming FBI Director Freeh and others, which would be repeated again along with more threats of court action as well as personal and slanderous anti-NPPA Internet attacks, and the launching of a counterfeit NPPA website. Peltier, his “defense committee” and sycophantic followers had no tolerance to having exposed, or to defend, their erroneous facts. The NPPA prevailed against the federal suits. They were summarily dismissed, the second one with prejudice.

Among many of Peltier’s outrageous claims was:

“I can’t believe that the FBI intended the deaths of their own agents…nor does it jibe with the fact that scores, even hundreds, of FBI agents, marshals, BIA police…were all lying in wait in the immediate vicinity…they’d barge in on that phony pretext, draw some show of resistance…then pounce on the compound with massive force.”

On another occasion Peltier claimed that the Agents were shooting when they came onto the Jumping Bull property. Another falsehood.

Over the years Peltier has gone to great lengths to denigrate the memory and sacrifice of Agents’ Coler and Williams.

But Peltier, as he is wont to do, with a predictably skewed and selective memory ignores the irrefutable fact that there was an eyewitness to exactly how the shooting began. Ron Williams was overheard on the FBI radio that he and Jack Coler were following a vehicle, that it had stopped and the occupants were getting out and appeared to be preparing to shoot at them. They heard Ron’s call for assistance. They heard him say that if they didn’t get there soon they would be dead. They heard him get shot. The transmission ended.

Peltier has feigned innocence and remains wholly unrepentant. These are just a few of his shallow public statements:

“And really, if necessary, I’d do it all over again because it was the right thing to do.” (Leonard Peltier, February 2010)

These statements are not taken out of context. They were made without any exceptions or qualifications and relate directly to the events of June 26, 1975.

As incredible as it may seem, Peltier’s attorneys allowed him to make this startling admission in his latest bid for clemency:

“I did not wake up on that June 26 planning to injure or shoot federal agents, and did not gain anything from participating in the incident.” (Emphasis added)

Peltier has offered numerous statements against his own self-interests. One, among many, was made to his biographer Peter Matthiessen:

“I seen Joe (Joe Stuntz) when he pulled it out of the trunk (Agent Coler’s FBI jacket) and I looked at him when he put it on, and he gave me a smile.”

Really? A smile? While two dead and mutilated human beings lay at their feet.

That is the Leonard Peltier everyone must remember.

In 2004 the NPPA made a “Pilgrimage to Pine Ridge.” It was an effort to see where Peltier’s infamy began and life ended for two outstanding young men.

Peltier made a pathetic attempt at an apology to the Agents’ families that was, at best, self-centered, and as the families related, thoroughly insulting.

“You, the agents’ families, certainly weren’t at fault that day in 1975, any more than my family was…Let those prayers be the balm for your sorrow, not an innocent man’s continuous imprisonment…I cannot see how my being here, torn from my own grandchildren, can possibly mend your loss. I swear to you, I am guilty only of being an Indian. That’s why I’m here. Being who I am, being who you are—that’s Aboriginal Sin.”

Peltier’s conviction and sentence have been upheld during nearly two-dozen appeals, twice reaching the U.S. Supreme Court, which denied certiorari. Among many other court findings is:

“The record as a whole leaves no doubt that the jury accepted the government’s theory that Peltier had personally killed the two agents, after they were seriously wounded by shooting them at point blank range with an AR-15 rifle.” (Rule 35 Motion, Eighth Circuit Court of Appeals, December 18, 2002) (Emphasis added)

Along with shallow claims of philanthropic activities, suspicious attempts to claim tax-deductible donations, shameless efforts to raise money for his ‘defense fund,’ seeking special treatment and probably running an illegal business within the prison system, along with other aspects, are the foundation of Peltier’s perpetual myth and folklore. There are additional elements of the Peltier saga and efforts by the NPPA: Presidents’ Clinton and Obama both saw through the ruse and denied clemency, Peltier’s 2009 parole hearing resulted in him being flopped for another fifteen years, along with failed attempts for (an undeserved) compassionate release.

Peltier’s loathsome and cowardly act makes him no more than a tired metaphor who can be likened to an overripe onion where each layer of myth and folklore hides what lies beneath. But peal away each successive layer until they are all removed and what is left? Nothing. Nothing but a brutal convicted double-murderer; so concluded the Fargo jury and every subsequent court reviewing his conviction and sentence.

Peltier’s repeated response to challenges are convoluted. He at once plays the victim and victor: The innocent Indian who had to pay the government’s price for the Agents’ deaths, or likewise, the wannabe Warrior who stood up for his people. Both claims are meaningless drivel.

The successful objective of the NPPA has been to thoroughly debunk the spurious, disingenuous and often fraudulent claims made by Leonard Peltier concerning his trial, conviction, sentence, the events on Pine Ridge, and beyond.

Peltier will remain serving his justified sentence as the No Parole Peltier Association continues its mission to remember the sacrifice of Jack and Ron and follow any developments relating to the principal coward of Jumping Bull. 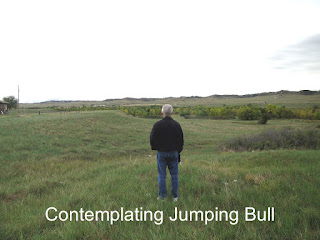