"For Immediate Release," the 40th Anniversary of the Incident of Oglala by the ILPDC is so pathetically inaccurate, all myth and folklore, (disinformation, fabrications and lies would be a better description), that it is not worthy of a response. (Footnote #1) Only to say, however, that there are fifteen years of accurate rebuttal on the NPPA website.

For only the second or third time in a decade and a half, someone actually attached their name to an LPDOC release and it's apparent that PETER CLARK is very new to the Peltier camp. Clark has a lot of research ahead of him (or he can just stick to the same old line), but one point, besides the cowboy boots, allegedly seeking a young Indian, wrongfully convicted, etc. etc., is "A family with small children was trapped in the cross fire." This lame fabrication was debunked in 2001. Not by allegations or supposition, but with facts. Facts from the trial and testimony from those who were there. The only people caught in a crossfire that day were Jack Coler and Ron Williams. (Fn. 2)

The ILPDC, or Clark, provides an updated diagram, loosely based on Peter Matthiessen's drawing, but now adds some details that are predictably inaccurate.

Within the diagram, Clark places colored depictions of the agent's vehicles and "Bodies of SA Williams and SA Coler." Not unexpectedly, Clark missed a critically significant detail. Placing the agents bodies on either side of Agent Coler's vehicle is not what happened. After the cowards of Jumping Bull, in an unprovoked attack, severely wounded both agents, and then blew away both their faces with point-blank shots; they were touched, and moved, and rolled over to face the ground. Both being shot in the face would not leave the bodies lying next to one another on the ground the way they were found. And how do we know this horrible little detail? A crime scene photo. (Fn. 3)

The significance of this latest message...and we've not yet heard from Peltier...is that they are so desperate and recycling the same putrid detritus they started out with decades ago. It didn't work then, and it doesn't work now.

Let President Obama look at this Peltier message and spend just a few minutes reviewing the actual file, let alone the self-incriminating and unrepentant statements Peltier has made of late, and clemency will disappear as quickly as Peter Clark's and Peltier's credibility and fables. 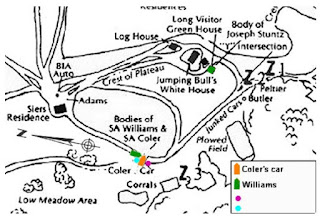 "In the Spirit of Coler and Williams"
Ed Woods