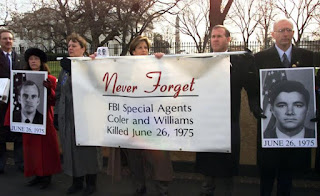 No clemency for Leonard Peltier

Manhattan: The May 30 article on Leonard Peltier “Won’t say I’m guilty” is filled with the same factual misstatements and false allegations used over the past four decades by Peltier in his failed legal appeals and clemency petitions. Similar to Peltier’s failed petitions for clemency, the article is filled with a combination of out-of-context court excerpts and falsehoods that have fueled the folklore surrounding Peltier since his conviction.

The facts have never changed. On June 26, 1975, Peltier was involved in an unprovoked attack on FBI agents Jack Coler and Ronald Williams while they were searching for a fugitive on the Pine Ridge Indian Reservation in South Dakota. Both agents were caught in an open field in a deadly crossfire by members of the American Indian Movement. Both agents were critically wounded and then summarily executed by Peltier at point-blank range.

Peltier was convicted of murdering Coler and Williams. In well over a dozen appeals, twice reaching the U.S. Supreme Court, every aspect of Peltier’s trial has been reviewed in minute detail. Each time, Peltier’s conviction has been upheld.

Peltier has never taken responsibility for his crimes while imprisoned, nor has he ever expressed remorse. He has been far from a model prisoner and would never be considered a candidate for clemency but for his status as a political celebrity. In 1978, he was involved in an armed escape from Lompoc Penitentiary, during which shots were fired at prison guards. For this post-conviction criminal act, Peltier received an additional seven-year consecutive sentence.

The families of Coler and Williams continue to suffer from the loss of their loved ones, and the FBI Agents Association, comprising more than 13,000 active and former FBI special agents dedicated to providing support and advocacy to colleagues, will not allow Peltier’s legal and public relations team to portray him as anything other than who Peltier really is: an unremorseful, cold-blooded killer.
Peltier should not be shown a mercy he refused to offer to agents Coler and Williams in 1975, and has denied to their families and friends over the past four decades. President Obama should deny his petition for executive clemency. FBI Special Agent Reynaldo Tariche, President, FBI Agents Association

"In the Spirit of Coler and Williams"
Ed Woods
Posted by Justice at 1:20 PM