Mr. Sharp made a number of claims about Peltier's conviction that need to be addressed and corrected.

“Judge” Kevin Sharp is grossly misrepresenting the record of Peltier’s conviction by inappropriately claiming that the ‘standards are different.’ Nonsense.

Sharp, by referencing Myrtle Poor Bear without acknowledging that she never testified, and that Peltier’s own attorney characterized her as a “…witness whose mental imbalance is so gross as to render her testimony unbelievable,” only plays right into the Peltier narrative. Sharp alleges that ballistics evidence was withheld from the defense, and then ignores the 1985 three-day evidentiary (ballistics) hearing and that the 8th Circuit reviewed the entire matter concluding “When all is said and done, however, a few simple but very important facts remain. The casing introduced into evidence had in fact been extracted from the Wichita AR-15. This point was not disputed...” and, “the trial witnesses unanimously testified that there was only one AR-15 in the compound prior to the murders, that this weapon was used exclusively by Peltier and carried out by Peltier after the murders.” (The Poor Bear affidavits were used regarding Peltier’s extradition. However, the Canadian Government, in 1999 was unambiguous, that “…Mr. Peltier was lawfully extradited to the United States,” “…the circumstantial evidence presented at the extradition hearing, taken alone, constituted sufficient evidence to justify Mr. Peltier’s committal on the two murder charges.”) Among many of Sharp’s misrepresentations is the wholly inaccurate claim that the government somehow changed its prosecution theory to one of Aiding and Abetting, again, ignoring the basic record that Peltier was indicted on November, 17, 1975 for murder and Aiding and Abetting, warrants were issued based on those charges, and within the Peltier trial transcript {4874 – 5164} the defense and prosecution discussed with the judge, jury instructions on Aiding and Abetting and that it was also included in the government’s closing argument. Sharp’s fatally flawed claim of ‘different standards’ collapses with one of the many appellate decisions from as late as 2003; “Previous federal court decisions provided the (parole) Commission with ample facts to support its conviction that Peltier personally shot Agents Coler and Williams.” “Neither the conviction nor any of the subsequent court decisions have been overturned.” (10th Circuit Court of Appeals, 1/4/2003). Sharp’s pro bono support of Peltier is admirable; he can be respected for that, but in the process, being a former federal judge and an attorney, he has to accurately assess the facts. Otherwise, it’s just more noise from the Peltier camp, and there would be much more to comment on Mr. Sharp’s public statement. 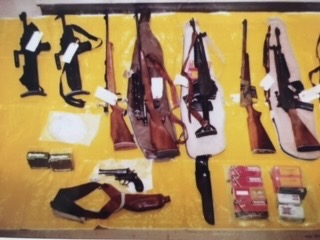 During Peltier's escape after murdering Agents Coler and Williams, he and other AIM members were stopped by Oregon State Troopers. Under the front seat where Peltier was seated was a paper bag. In the bag was Agent Coler's service revolver. Identified on the bag was Peltier's thumbprint. Also recovered in the RV (the RV was provided by actor Marlon Brando) were the weapons pictured above, and a clear indication that they were not just vacationing. Peltier escaped, and with assistance, made his way to Canada where he was arrested on February 6, 1976, now just five days away from the beginning of his incarceration. A passenger in the RV was Anna Mae Aquash who became another sordid chapter in the Peltier/AIM legacy. https://www.youtube.com/watch?v=b0PGVTy893s Another passenger, Darlene (Ka Mook) Nichols, later testified and emotionally broke down on the witness stand,  in the trial of Anna Mae's killer, that Peltier had described (Agent Williams) final moments, "He said that the M.....F.....was begging for his life but I shot him anyway."