Bendery tells us that Huffpost has been reporting on Peltier for months, but she still hasn’t gotten it right. Apparently, Bendery was absent from Journalism 101 the day it was explained that when using quotes, one has to be both accurate and put a little effort into corroboration. Bendery references a recent FBI letter to the U.S. Pardon Attorney, as ‘bogus.’

Bendery’s April 20, 2022, “The FBI says…” article is so rife with factual errors that it would take days to correct all the inaccuracies, but here is just a sample of what is truly “bogus,” one-sided references that amount to no more than a Peltier press release.

Bendery claims that the “FBI’s statement is outdated, misleading or flat-out wrong.” But accusing the FBI of what this article purports as factual, is precisely what she is doing.

Bendery feebly alleges that Peltier’s FOIPA receipt of an October 2, 1975, FBI Laboratory Teletype somehow “…had unequivocally ruled out Peltier’s gun as the murder weapon.” Yet, Bendery deliberately ignores a 1984, three-day evidentiary (ballistics) hearing that when it reached the 8th Circuit Court of Appeals (9/11/86, Judges’ Heaney, Ross and Gibson) concurred:

“That when all is said and done, however, a few simple but very important facts remain. The casing introduced into evidence had in fact been extracted from the Wichita AR-15. This point was not disputed; although the defense had its own ballistics expert, it offered no contrary evidence.” (Throughout Peltier’s trial and numerous appeals, the Wichita AR-15 was identified as Peltier’s weapon.)

In other words, Bendery’s ‘unequivocally’ statement is false and Peltier had nowhere to go with what he imagined the Teletype meant.

Bendery repeats the falsity that the government changed its theory from one of murder to aiding and abetting. This fiction, also promoted by former (South Dakota—Peltier was prosecuted in North Dakota), U.S. Attorney, James H. Reynolds, and current Peltier attorney, Kevin H. Sharp, totally ignores that this issue had been thoroughly discredited in a clearly definitive appellate decision (8th Circuit, 7/7/93), that read, in part:

“It is impossible to conclude that (AUSA) Crooks…abandon(ed) one of the two theories upon which the government had tried the case and upon which the case was submitted to the jury.” “Peltier’s arguments fail because their underlying premises are fatally flawed. (A) The Government tried the case on the alternative theories; it asserted that Peltier personally killed the agents, but that if he had not done so, then he was equally guilty of their murders as an aider and abettor.”

What part of “impossible” and “fatally flawed” for Bendery, and for that matter, Reynolds and Sharp, is so difficult to understand? The legal conclusion and language are clear enough. No one at Huffpost should be confused on that point.

Bendery attempts to claim that “…there was never evidence that Peltier aided and abetted anyone.”

Really, is that so? Then Peltier must have been in Seattle that June day.

Testimony placed Peltier at the crime scene with Robideau and Butler, but even if Bendery wants to discount that, there’s Peltier’s own statement to Peter Matthiessen (Spirit p. 552). “’I seen Joe when he pulled it out of the trunk (of Agent Coler’s vehicle) and I looked at him when he put it on (Agent Coler’s FBI jacket) and he gave me a smile.’ Leonard remembers. ‘I didn’t think much of it at the time; and all I could think of was, we got to get out of here.’”

There’s Peltier, in his own words—at the crime scene—with at least one other person, Joe Stuntz. This, while two dead, mutilated and manhandled bodies lay at their feet. (More on that follows.)

The October 2, 1975 Teletype was appealed on the basis of a discovery issue, Brady v. Maryland. (The Government considered the teletype a preliminary document and had provided complete Laboratory Reports to the Defense. The District of North Dakota Court {12/30/82} concurred that the teletype was cumulative in light of trial testimony.) Nevertheless, this unanimous decision, authored by Judge Heaney (8th Circuit. 9/11/86), rested on U.S. v. Bagley.

Bendery claimed that “…the court ruled it was possible that a jury would have come to a different conclusion but could not say definitively yes.”

So much for journalistic research to determine the facts. That’s not how it ended.

Although Judge Heaney said this was a difficult decision, he made it based on the law, concluding “Yet, we are bound by the Bagley test requiring that we be convinced, from a review of the entire record that had the data and records withheld been made available, the jury probably would have reached a different result.

We have not been so convinced.

What part of ‘entire record’ and ‘We have not been so convinced’ is so difficult to comprehend? (The “We” of course, were Judges’ Heaney, Ross and Gibson.) This conclusion, contrary to Bendery’s imagination that the court “could not say definitively yes,” was very much a definitive, yes.

Quoting Justin Mazzola of Amnesty International, without even the slightest effort to verify its accuracy, is another example of Bendery’s Peltier press release reporting.

The Canadian Government was fully aware of the three Myrtle Poor Bear affidavits and determined, “I have concluded that Mr. Peltier was lawfully extradited to the United States. In my opinion, given the test for committal for extradition referred to above, the circumstantial evidence, taken alone, constituted sufficient evidence to justify Mr. Peltier’s committal on the two murder charges.

Bendery misses even more readily available evidence that places the Poor Bear issue in its proper perspective. During Peltier’s trial, when the defense believed the Government may have planned calling Poor Bear as a witness, Peltier’s own attorney, John Lowe, had this to say “…a witness whose mental imbalance is so gross as to render her testimony unbelievable.”

Anyone missing the point here? Mazzola’s erroneous statement, and Bendery’s lack of any research, failed to show that Peltier certainly didn’t want Poor Bear to testify, either for or against him at trial. This was the conclusive ending to the Poor Bear saga.

As anyone familiar with this case understands, Judge Heaney, a respected jurist, played a critical role in the Peltier matter.

Bendery editorializes Judge Heaney’s 4/18/91 letter (important to note it was written eight years before the Canadian Government’s affirmation of Peltier’s extradition), and although Judge Heaney felt very strongly about Native American issues and the Peltier case, he nevertheless and honorably, made his decisions based on the law.

In Judge Heaney’s letter, Bendery didn’t note or share that “No new evidence has been called to my attention which would cause me to change the conclusions reached in this case.” Nor, that he stood firm on Peltier’s guilt, “…the record persuades me that more than one person was involved in the shooting of the FBI Agents. Again, this fact is not a justification for Peltier’s actions, but is a mitigating circumstance.”

Bendery, Reynolds and Sharp: Do you comprehend the subtle irony here?

Judge Heaney, perhaps inadvertently, we will never know for certain, fortified the notion of Peltier’s aiding and abetting charge, “…more than one person was involved.”

Further, in a televised interview Judge Heaney was asked if Peltier received a fair trial; “He got a fair trial, not a perfect trial, but a fair trial.” Anyone even remotely familiar with the criminal justice system recognizes that ‘perfect’ trials are indeed rare.

Citing erroneous statements could go much further, however, just a couple more points:

Bendery, from the entire history of the Peltier legal process, ironically quoted one of only two negative comments from the courts (the one other was relegated to the status of a footnote, along with a clarification and explanation). This decision was unrelated to Peltier’s murder conviction but addressed a parole appeal issue.

“Much of the government’s behavior at the Pine Ridge reservation and in its prosecution is to be condemned. The government withheld evidence. It intimidated witnesses. These facts are not disputed.”

This gratuitous comment aside, the government did dispute these allegations during hearings and motions to the courts.

Bendery casually acknowledges that this court ruled against Peltier on the parole question, but she didn’t, and likely would not include, the court’s preceding review and conclusion of the record regarding Peltier’s actual guilt and conviction:

To place a finer point on this, here is a court that criticized the government but after reviewing the legal history had no difficulty expressing Peltier’s guilt.

Bendery references, but does not understand that the public statements by former (South Dakota) U.S. Attorney, James H. Reynolds and his outlandish public comments and claims of involvement in the Peltier matter have been completely discredited. (AUSA Lynn Crooks, the attorney who managed the Peltier appellate process: “This claim is a gross misstatement of the record.” “To the best of my knowledge, he {Reynolds} contributed nothing what-so-ever to what went into the final brief on Direct Appeal or into any of the subsequent government briefs resisting Peltier’s numerous attempts to obtain Post Conviction Relief.”)

For Reynolds to publicly claim that, “We were not able to prove that Mr. Peltier personally committed any offense on the Pine Ridge Reservation,” is sadly disturbing and only demonstrates an overwhelming lack of understanding of the Peltier trial and voluminous appellate history. His motivation for such a provably false claim (Was Peltier not convicted of murder and aiding and abetting?) is suspect at best, and troubling at worst.

Finally, Kevin H. Sharp, as quoted by Bendery, has made a number of claims that cannot be supported by the record, yet recently, in a public radio interview, he ventured well into the realm of libel. Sharp casts serious aspersions and allegations on the integrity, competence and fidelity to their judicial oath, against all the judges and jurists, some twenty or more, who rendered decisions in the Peltier case. This would also include sullying the memory of war hero and respected jurist, Gerald Heaney.

It's apparent that Ms. Bendery has no interest in the facts, record, or truth, but rather subscribes to, and promotes the Peltier myth and folklore—folklore decades in the making and manufactured on a mountain of falsehoods and provable lies. Perhaps she should write Leonard and ask him to explain what Mr. X was all about.

If Peltier’s name was James Maloney, and the murders occurred in, let’s say, El Centro, California, no one would know his name, or for that matter, care. But for the fact that Peltier is what he is, and where it happened, is the only difference. Nevertheless, after numerous appeals, the courts upheld Peltier’s conviction for being guilty of wanton and unprovoked murder.

“In the Spirit of Coler and Williams” 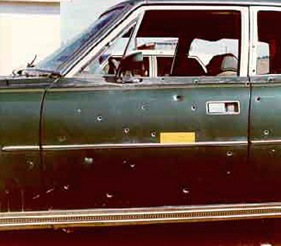 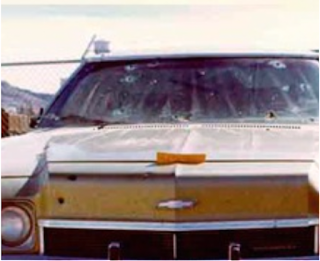 Jack is on the left, Ron on the right. Both shot in the face. Ron was alive and faced Peltier, a hand raised against the muzzle of an AR-15, blowing his fingers through the back of his head. Yet, here they are, faces destroyed, lying face down. Ask Peltier which one of the cowards that day manhandled the mutilated bodies, perhaps ending their final deadly act with callous insult by counting coup. Odds are, they all did.