“I’m hit” were the last words the FBI heard from Agent Williams.

His very last words were heard by Leonard Peltier.

Just before noon, FBI Agents Jack Coler and Ronald Williams, in separate vehicles, were searching for a fugitive, Jimmy Eagle. The Agents followed a suspect Suburban containing three individuals from a rural highway onto a dirt road leading to the Jumping Bull family farm in a remote corner of the Reservation.

The Suburban stopped at a distance, as did the Agents, who were now exposed in an open field. 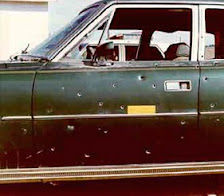 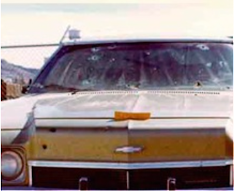 The unprovoked attack and what followed is undisputed. Agent Williams was on the FBI radio describing that the three individuals were getting out with rifles and were about to fire at them. As gunfire erupted, personnel in the FBI’s Rapid City office heard Agent Williams trying to describe their location. The radio call for assistance ended with, “I’m hit.”

Unknown to the FBI, and the two Agents, was the presence of an American Indian Movement (AIM) camp nearby and that they had actually followed Leonard Peltier, who was also a fugitive at the time. When the shooting began, others from the AIM camp, with rifles, pinned the Agents in a deadly crossfire. The attack didn’t last long with no fewer than 125 bullets holes in the FBI vehicles.

Agent Coler received a devasting wound to his right arm. Agent Williams, wounded three times, removed his shirt and waved it as a sign of surrender—which was ignored, and crawled to his critically wounded partner, using his shirt as a tourniquet on Agent Coler’s shattered arm. Williams waited, hoping that help would arrive quickly, not knowing that the first to find the Jumping Bull farm were also fired upon and forced back to the highway.

Later trial testimony placed the three older AIM Indians, Leonard Peltier, Bob Robideau and Dino Butler at the Agents’ vehicles. Agent Williams faced his killer as the muzzle of Peltier’s AR-15 was placed against a raised hand and fired—fingers blown through the back of his head. It was hoped that Agent Coler was unconscious as the weapon turned towards him, with two more, point-blank bullets to his face.

Peltier and others, stole what they could, shot at responding law enforcement, but managed to elude capture.

The Peltier myth quickly emerged, resting on the notion that since Native American history with the government was dismal at best, that Peltier’s plaintive cries of innocence must be true, and that someone had to pay for murdering the Agents.

Feigned innocence aside, a number of times Peltier changed his version of that June day and along the way, considered within the context of his public statements, made tacit admissions of guilt while showing no remorse at all. Over nearly two decades his alibi was that someone else, someone they knew but would not name, the phantom Mr. X in the infamous red pickup, was the one who killed the Agents. “This story is true” Peltier falsely claimed in a television interview. The lie continued until one of his own, Dino Butler, publicly denied it, and later, one of his own attorneys as well.

Peltier’s involvement with AIM was mostly as a bodyguard and enforcer with one documented incident of placing a gun in the mouth of a suspected FBI informant. Time has proven that the loyal Anna Mae Aquash wasn’t, but nonetheless, AIM leadership ordered her execution.  Aside from AIM’s purported and enticing goals, its history of disruption and violence leaves little doubt that while some leaders became rich and famous, they collectively contributed nothing to the betterment of their people.

Peltier supporters come in a few categories: Those who disdain America and will use any excuse, whether they believe in Peltier or not, while most are not even Native Americans; those who have bought into the Peltier folklore without the slightest effort to verify his fabricated claims; and by individuals who fail to comprehend Peltier’s voluminous and detailed appellate history. This also includes recent attorneys, in their zeal and advocacy, who would remarkably rather repeat the myth while ignoring or misrepresenting the facts.

What followed Peltier’s conviction was an endless stream of motions and appeals, well over a dozen, raising efforts to distort the record and often with frivolous filings. The result was that every single issue raised; and this bears repeating, every single issue Peltier raised was reviewed in minute detail by the appellate courts; some replying with disparaging critiques. One later court decision made Peltier’s guilt unmistakably clear, “Previous federal court decisions provided the (Parole) Commission with ample facts to support its conviction that Peltier personally shot Agents Coler and Williams.” “Neither the conviction nor any of the subsequent court decisions have been overturned.” (10th Circuit Court of Appeals, 11/4/03)

On that June day, there was no question that the two white men, in civilian clothes, driving late model sedans with additional antennas, were the Feds. This was common knowledge on the Reservation. Added to this was that one of the passengers with Peltier was questioned the prior evening by the same two FBI Agents, pursuing their search for fugitive, Jimmy Eagle.

Knowing he had been followed by federal Agents, and that he was also a fugitive himself at the time and obviously not wanting to be arrested; disproven fabrications aside, Peltier portends a motive for the unprovoked attack.

Peltier, unsurprisingly, fails to recognize that adding political prisoner to his criminal resume   creates a serious conflict: Because, it then follows that the deaths of Agents’ Coler and Williams weren’t murder after all, but, assassinations. Nevertheless, neither Peltier, his supporters, nor his attorneys want to venture down the path of, Peltier the assassin. Yet, Peltier shamelessly promotes this deception to the public as if it has any legitimacy. Peltier was not engaging in political activity, discourse or dissent that day, but in a purely senseless and maliciously lawless act. However, Peltier did grasp that dead men make poor witnesses.

Considering an obvious reality, if Peltier’s name was, say, James Maloney, and the murders took place in, let’s say, El Centro, California, no one would know his name, or for that matter, even care. But for the fact that Peltier is what he is and where it happened, is the only difference; clearly, making both incidents violent and felonious criminal acts.

The final moments of Ron Williams life were revealed during sworn testimony in a later, unrelated trial. During their escape from Pine Ridge Peltier made a stark admission;

“The ‘M-expletive’ was begging for his life, but I shot him anyway.”

Jack Coler on the left, a shirtless Ron Williams on the right. Both Agents, shot in the face, are found face down; manhandled in death as the final insult to the brutal murders. Adding further offense to the carnage, in a June 2, 2004 email to this writer, Bob Robideau said,